What does Kris mean?

[ 1 syll. kris, kr-is ] The baby girl name Kris is also used as a boy name, with the latter form being more popular. It is pronounced in English as KRIHS †. Kris has its origins in the Latin language. It is used largely in English, German, and Scandinavian.

Kris is a spelling variant of the English and German Chris.

Kris is unusual as a baby girl name. Its usage peaked modestly in 1965 with 0.053% of baby girls being named Kris. It had a ranking of #277 then. The baby name has substantially slipped in popularity since then, and is of only sporadic use today. In 2018, among the family of girl names directly related to Kris, Christina was the most widely used. Though there were times from 1947 to 1970 when more girls than boys were given the name Kris, the name is today more frequently used for boys. There were 2 times more boys than girls who were named Kris in 1975. 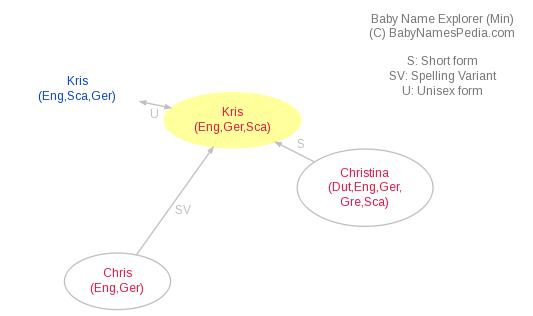