What does Kyle mean?

[ 1 syll. ky-le, kyl-e ] The baby girl name Kyle is also used as a boy name, with the latter form being far more popular. It is pronounced KihL- †. Kyle's language of origin is Hebrew and Celtic. It is predominantly used in Yiddish and English. Celtic origin, English use: It is derived from the word caol which is of the meaning 'narrow, slender'. The first name is from the Scottish surname, which is from a place name so named in the county of Ayrshire in south-west Scotland; it is also a topographic term referring to a narrow channel or strait. The first name was adopted by English speakers in the mid 20th century. In recent times, the female name has been used as a diminutive of Kylie. See Kyle for more information.

In addition, Kyle is a form (Yiddish) of the English, Hebrew, and Yiddish Kelila.

Kyle is also a form of the Yiddish and English Kyla.

Kyle is a rare baby girl name. At the modest peak of its usage in 1987, 0.017% of baby girls were named Kyle. It had a ranking of #606 then. The baby name has fallen from favor since then, and is currently of only sporadic use. In 2018, out of the family of girl names directly related to Kyle, Kylie was the most frequently used. In the last century Kyle has mainly been a boy name. There were 91 times more boys than girls who were named Kyle in 1990. 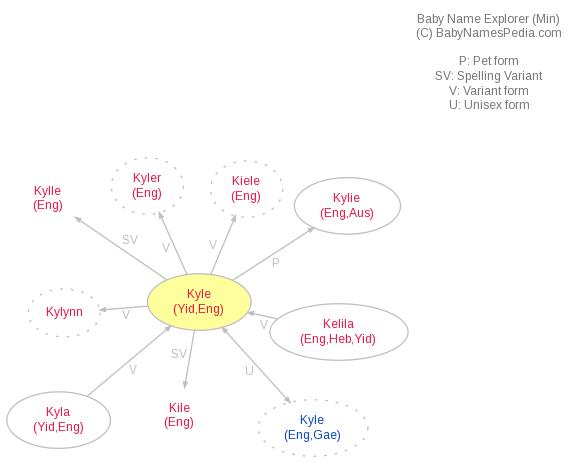