What does Kyle mean?

[ 1 syll. ky-le, kyl-e ] The baby boy name Kyle is sometimes used as a girl name. Its pronunciation is KihL- †. Kyle is used predominantly in the English and Gaelic languages, and it is derived from Celtic origins. It is derived from the element 'caol' which means narrow, slender. The first name is from the Scottish surname, which is from a place name so named in the county of Ayrshire in south-west Scotland; it is also a topographic term referring to a narrow channel or strait. The first name was adopted by English speakers in the mid-20th century. See Kyle for more information. The name Kyla (Yiddish and English) is the female version of Kyle.

Kyle is a popular baby name for boys. The name's popularity jumped from the 1910s up to the 1990s. At the height of its usage in 1990, 1.056% of baby boys were given the name Kyle. Its ranking then was #18. The baby name has since experienced a steep loss in popularity. In 2018, its usage was only 0.086% and its ranking #223, but it was nonetheless the most popular within all boy names in its group. In 2018, Kyle was used 48% more than the next ranked name, Kyler. In the past century Kyle has predominantly been a baby boy name. In 1990, Kyle as a baby boy name outnumbered its use as a girl name by 91 times. 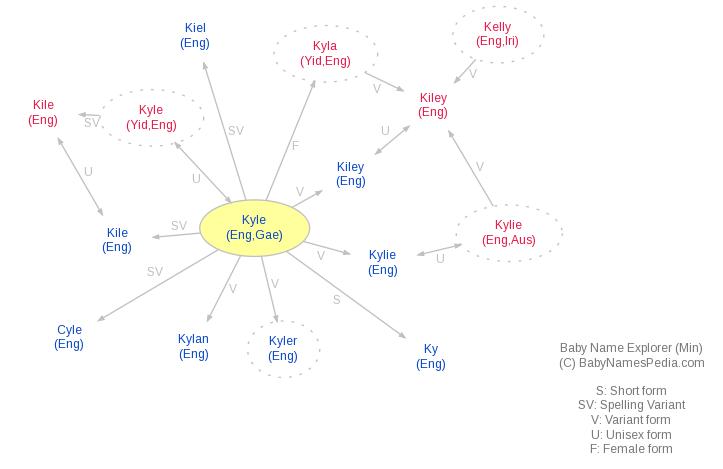