What does Kylie mean?

[ 2 syll. ky-lie, kyl-ie ] The baby girl name Kylie is also used as a boy name, though it is far more popular for girls. It is pronounced KAY-Liy- †. Kylie's origin is Celtic and Australian, and its use, English and Australian. Australian origin, Australian and English use: The word kylie is from an Australian Aboriginal language, but the name is most likely a coinage influenced by the names Kyle and Kelly. The popularity of the name has been mainly boosted by the Australian actress and singer Kylie Minogue (1968-), who first found fame acting in the long-running Australian television soap opera Neighbours (1985-), and then went on to become an international pop star.

In addition, Kylie is a form of the Yiddish and English Kyla in the English language.

Kylie is also a familiar form of the Yiddish and English Kyle.

Kylie is popular as a baby girl name. The name increased in popularity from the 1970s up to the 2000s; prior to that, it was of only infrequent use. At the modest height of its usage in 2003, 0.277% of baby girls were named Kylie. It was #52 in rank then. The baby name has seen a decline in popularity since then. In 2018, it ranked at #124 with a usage of 0.131%, but it was nevertheless the most popular within all girl names in its family. Kylie was thrice as popular as the 2nd ranked name, Kyla, in 2018. Kylie has in the last century been primarily given to baby girls. 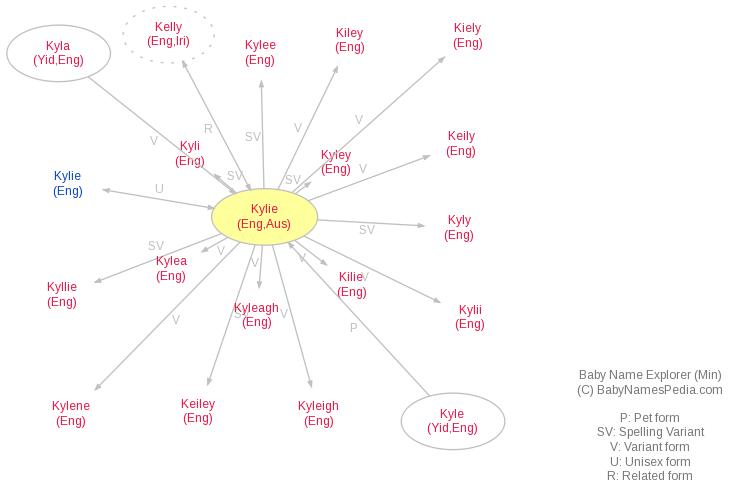