What does Lamar mean?

[ 2 syll. la-mar, lam-ar ] The baby boy name Lamar is pronounced Laa-MAAR †. Lamar has its origins in the Old French language and it is used largely in English. The first name could be derived from the surname, which is from a place called 'La Mare' in Normandy; the place name is from the Old French mare (meaning 'pool, pond'). The first name could also be from the Spanish place name Mar in Asturias, which is of the element mar.

The spelling variants Lamarr (English) and Lamarre (English) are other forms of the name.

Lamar is rare as a baby name for boys. At the modest peak of its usage in 1989, 0.035% of baby boys were named Lamar. Its ranking then was #325. The baby name has since dropped out of favor, and is of only irregular use today. Out of all boy names in its group, Lamar was nevertheless the most popular in 2018. 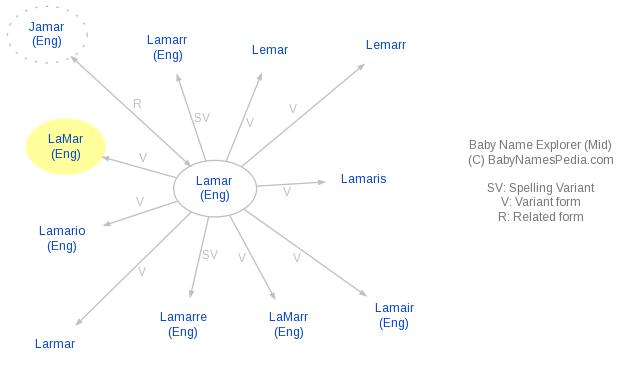