What does Lacy mean?

[ 2 syll. la-cy, lac-y ] The baby girl name Lacy is also used as a boy name, though it is slightly more popular for girls. It is pronounced as LEY-Siy- †. Lacy is of Old French and Old Greek origin. It is used mainly in English. The first name is derived from a surname which is itself a variant of Lacey.

Lacy is a spelling variant of the English Lacey.

Lacy is also a diminutive of the German and Russian Larissa.

Lacy is unusual as a baby girl name. Its usage peaked in 1983 with 0.054% of baby girls being named Lacy. It had a ranking of #242 then. The baby name has fallen out of favor since then, and is used only on a very modest scale today. Among the family of girl names directly related to Lacy, Lacey was the most commonly used in 2018. Although Lacy is somewhat used more commonly as a baby girl name today, there was a period prior to 1968 that it was more popular with boys. After 1975, increasingly the name became more popular with baby girls than with boys. 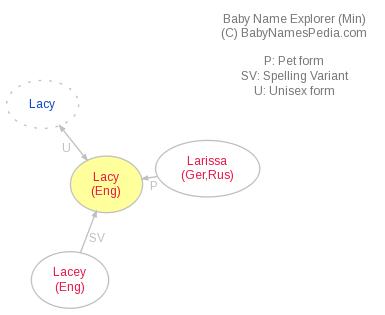