What does Laerke mean?

[ syll. lae-(r)ke, la-e-rke ] The baby girl name Laerke is used predominantly in the Scandinavian language and its origin is also Scandinavian. It is derived literally from the word 'laerke' meaning lark. The first name is written in Danish as Lærke; it is from the Danish bird name.

Laerke is not frequently used as a baby girl name. It is listed outside of the top 1000. 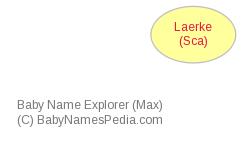