What does Lambert mean?

[ 2 syll. lam-ber(t), la-mbe-rt ] The baby boy name Lambert is pronounced LAEM-BahRT in English, LAAM-BahRT in Dutch, LaeM-BEHR in French, or LAAM-BehRT in German †. Lambert's origin is Germanic, and its use, Dutch, English, French, and German. The meaning of Lambert is 'famous landowner'. It is a two-element name derived from lant and berht which are of the meanings 'land, territory, homeland' and 'bright, famous' respectively. An older form of the name is Lantbert (Germanic). The name was borne by Saint Lambert (636-700), the bishop of Maastricht who went with the Normans to England. The name became popular in the Middle Ages due to Dutch immigrants.

Lambert has 22 forms that are used in English and foreign languages. English forms of the name include Lam, Lamb, Lambar, Lambard, Lambart, Lamber, Lamberts, Lambirt, Lambirto, Lambret, Lambrett, Lambur, Lampard, and Landbert. Other English variants include the familiar forms Bert (also used in Dutch and Scandinavian), Bertie, and Lamby.

See also the related forms, the English, French, and German Lance and the German, English, Portuguese, and Spanish Lando.

Lambert is uncommon as a baby boy name. In 1900, 0.012% of baby boys were named Lambert. It was #571 in rank then. The baby name has dropped out of favor since then, and is of only sporadic use now. In 2018, within the family of boy names directly related to Lambert, Lance was the most popular. 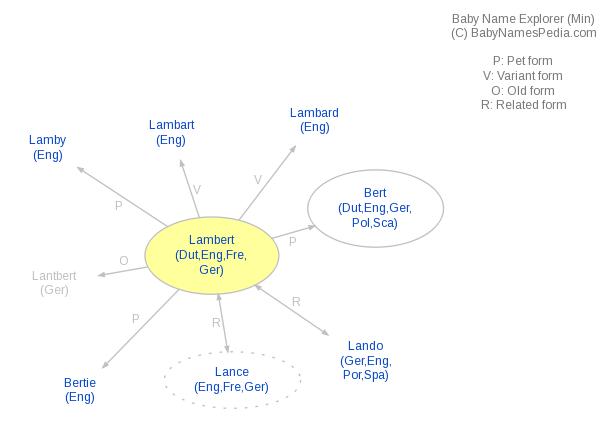