What does Lara mean?

[ 2 syll. la-ra, lar-a ] The baby girl name Lara is pronounced as LAAR-ah in English or LAA-Raa in German †. Lara is largely used in English, Russian, Slavic, and German. It is derived from Latin and Old Greek origins. In Roman mythology, Lara or Larunda was a beautiful nymph exiled to the Underworld by Jupiter for revealing his amorous affairs. The name was introduced to English speakers by Boris Pasternak's novel Doctor Zhivago (1957) and the subsequent highly successful film (1965), in which Lara Antipova is the name of the tragic heroine. It was also made known by Lara's Theme, the name of the recurring musical cue for the film written by Maurice Jarre. In recent times, the name has been made known by Lara Croft, the action heroine of the Tomb Raider video game series (1996-) and subsequent movies (2001,2003).

In addition, Lara is a contracted form of the name Klara (Czech, German, Latvian, Polish, Russian, Scandinavian, Slavic, and Ukrainian) as well as a variant transcription of the name Clare (English).

Lara is also an English, Russian, and Slavic contracted form of the name Larissa (German and Russian).

Lara is also an English, German, and Russian variant transcription of Laura.

Variant forms inherit both the origin and meaning of Lara.

Lara is somewhat popular as a baby girl name. The name increased in popularity during the 1960s; before that, it was of infrequent use only. At the modest height of its usage in 1969, 0.077% of baby girls were named Lara. It had a ranking of #224 then. The baby name has seen a fall in popularity since then. In 2018, its usage was 0.019% and its ranking #757, but it was nevertheless the 2nd most popular after Laura, within all girl names in its family. In 2018, the name was thrice as popular as Lara. 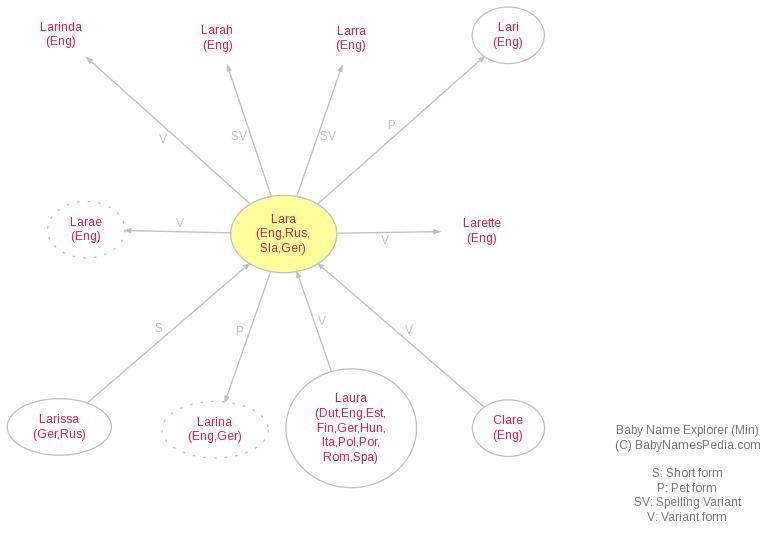