What does Laura mean?

[ 2 syll. lau-ra, la-ura ] The baby girl name Laura is also used as a boy name, though it is far more popular for girls. It is pronounced in English as LAOR-ah or in Dutch, German, Italian, Polish and Spanish as LAW-Raa †. Laura has its origins in the Latin language. It is used largely in Dutch, English, Estonian, Finnish, German, Hungarian, Italian, Polish, Portuguese, Romanian, and Spanish. It is derived from the word laurus with the meaning 'laurel, bay'. An original form of the name is Laurentia (Latin). The name was borne by the 9th century Saint Laura of Cordoba, who was martyred in Muslim Spain. The love poetry addressed to 'Laura' by the Italian Renaissance poet Petrarch (1304-1374) popularized the name in the medieval period; the lady referred to could have been Laura de Noves (1308-1348), the wife of Count Hugues de Sade. The name was adopted by English speakers in the 16th century, and it saw a revival in the 19th century from Italian influence. Laura is the feminine equivalent of the English and French Laurence.

What are the Variant Forms of Laura?

See also the related forms, the name Analaura, the English Lauralynn, and the Filipino and Italian Lauro.

Laura is an all-time favorite. Currently it is still rather popular as a baby girl name, but to a lesser degree than it was in the past. Its usage peaked in 1968 with 1.096% of baby girls being named Laura. It was #11 in rank then. The baby name has experienced a substantial decline in frequency since then, and in recent times it is used only on a modest scale. In 2018, it ranked at #340 with a usage of 0.051%, but it was nevertheless the 3rd most popular after Lauren and Lola, among all girl names in its family. Lauren was 82% more widely used than Laura in 2018. Laura has primarily been a baby girl name in the last century. In 1968, 343 times more baby girls than boys were given the name Laura. 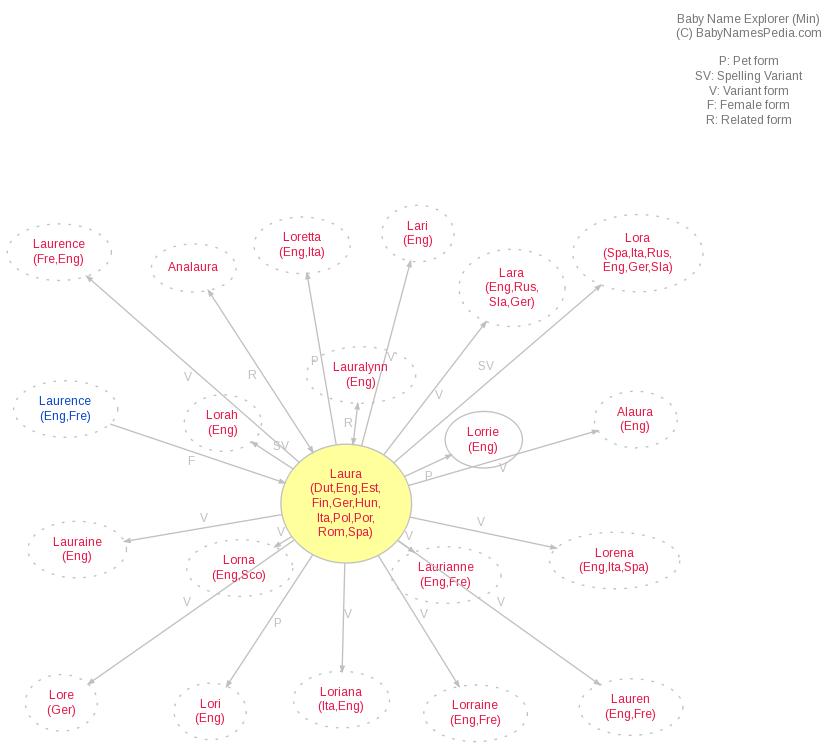