What does Laurence mean?

[ 2 syll. lau-ren-ce, la-ure-nce ] The baby boy name Laurence is sometimes used as a girl name. Its pronunciation is LAOR-ehNTS or LowRAHNZ †. Laurence is largely used in the English and French languages, and it is derived from Latin origins. The first name is from the Roman byname Laurentius (Latin), which means 'man from Laurentum'; Laurentum refers to a city in Latium which took its name from the Latin 'laurus' (meaning laurel, bay), possibly in reference to a crown of laurel leaves, the symbol for victorious Roman emperors. The name was popularized in the early medieval period by a well-known 3rd century saint who was martyred on a gridiron; he was also one of the seven deacons of Rome. The name was later popularized by Saint Laurence of Canterbury (-619), the second Archbishop of Canterbury. The name fell into disuse after the Middle Ages, but was revived in the 19th century, due to the fame of T. E. Lawrence (1888-1935), the charismatic British soldier and writer involved in the Arab Revolt (1916-1918) and popularly known as 'Lawrence of Arabia'. The 'w' re-spelling is common in the USA and Canada. The name Laura (Dutch, English, Estonian, Finnish, German, Hungarian, Italian, Polish, Portuguese, Romanian, and Spanish) is the female equivalent of Laurence.

What are the Variant Forms of Laurence?

Laurence is a rare baby name for boys. At the modest peak of its usage in 1912, 0.060% of baby boys were given the name Laurence. It ranked at #204 then. The baby name has since steeply fallen in popularity, and is now of infrequent use. In 2018, out of the group of boy names directly linked to Laurence, Lorenzo was the most widely used. In the past century Laurence has mostly been a baby boy name. 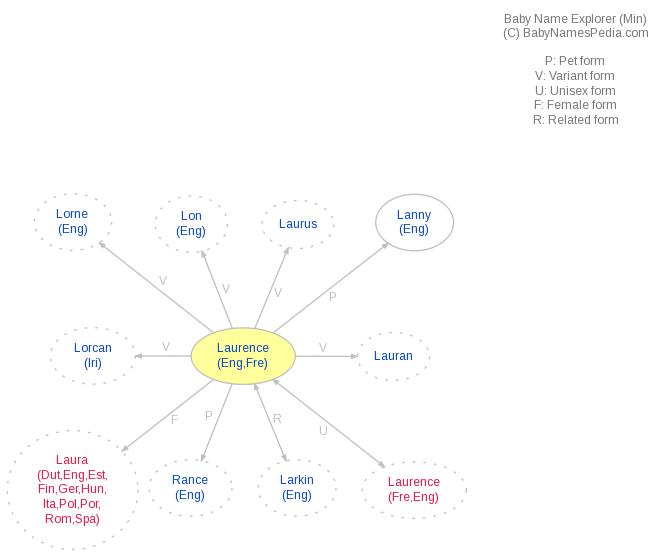