What does Lavinia mean?

[ 4 syll. la-vi-nia, lav-in-ia ] The baby girl name Lavinia is pronounced Laa-VIHN-iy-aa- †. Lavinia is of Latin origin, and it is used mainly in the English, German, and Italian languages. The first name is from the name of the ancient city of Lavinium in Rome. According to Roman mythology, the Trojan hero Aeneas named the city after his wife, Lavinia, but it is most likely that the character was invented to explain the place name. The first name has been used by aristocrats from the Middle Ages, and it saw a revival among English speakers in the 18th century.

Lavinia has 23 forms that are used in English and foreign languages. Forms used in English include Laia, Lavena, Lavin, Lavina, Lavine, Lavinie, Levenia, Levina, Levinia, Livinia, Louvenia, Louvinia, Lovina, Lovinia, Luvena, Luvenia (used in Spanish as well), Luvina, Luvinia, and Lyvinia. The diminutive forms Vinia and Vinnie, and the variant spelling Lavenia are other English forms. The Polish Lawinia is a form of Lavinia that is in foreign languages.

Variant forms inherit the origin and thus the meaning of the name Lavinia.

Lavinia is rare as a baby name for girls. In 1900, 0.013% of baby girls were given the name Lavinia. It ranked at #528 then. The baby name has since markedly declined in popularity, and is of only irregular use now. Out of all girl names in its group, Lavinia was nonetheless the most commonly used in 2018. 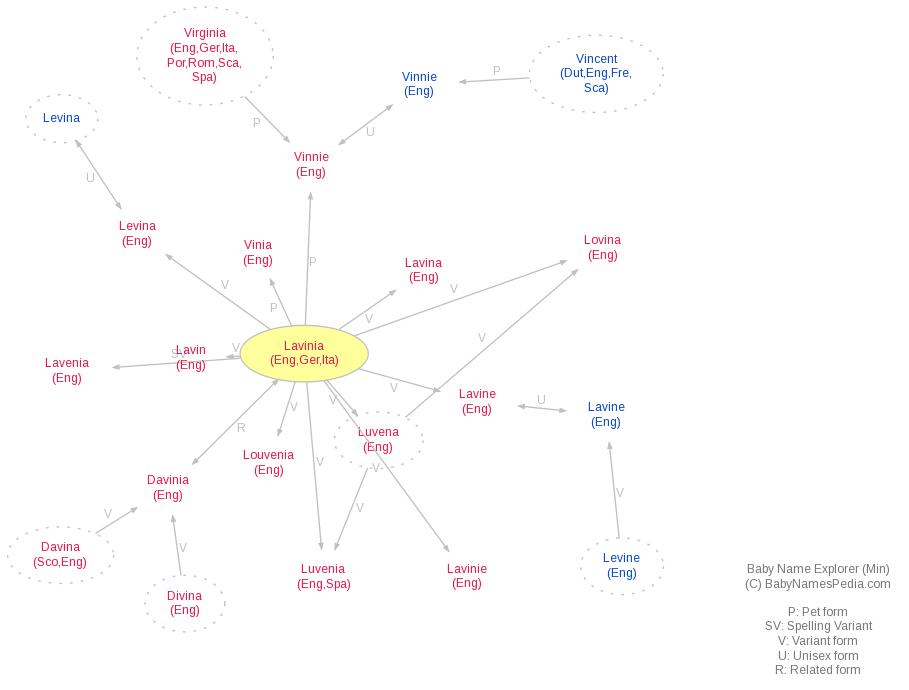