What does Lazarus mean?

[ 3 syll. la-za-rus, laz-ar-us ] The baby boy name Lazarus is pronounced LAEZ-ahR-ahS in English †. Lazarus' language of origin is Hebrew. It is predominantly used in the English and German languages. The name means 'God has helped'. It is a biblical name derived from el meaning 'God, powerful' ; azar 'to help'. Older forms of Lazarus include Eleazar (Hebrew), Eliezer (Hebrew), Lazar (Aramaic), Lazaros (Old Greek), and Lazarus (Latin). The name is Latinized from the Greek Lazaros, which is of the Aramaic Lazar, a short form of the Hebrew Eleazar or Eliezer. The name was borne by two characters in the Bible: the brother of Mary and Martha whom Jesus raised from the dead, and a beggar who was 'full of sores'. Due to the latter, the name came to be associated with lepers in the medieval period and was therefore hardly used as a first name. It was used on an irregular scale by English speakers in the 17th century, mostly among Jews. Among Puritans, it has sometimes been adopted for its associations with the Christian notion of heavenly rewards for leading a life of poverty.

Lazarus has 18 derivatives that are used in English and foreign languages. Derivatives of the name used in English include Eleazer, Lasarus, Laz, Lazarillo, Lazarius, Lazaro (used in Italian and Spanish as well), Lazaros, Lazear, Lazer, Lazorus, Lazre, and Lazrus. The short form Lazar (used in Aramaic, Hebrew, Russian, and Slavic as well) is another English variant.

Lazarus is not frequently used as a baby boy name. It is not ranked within the top 1000. 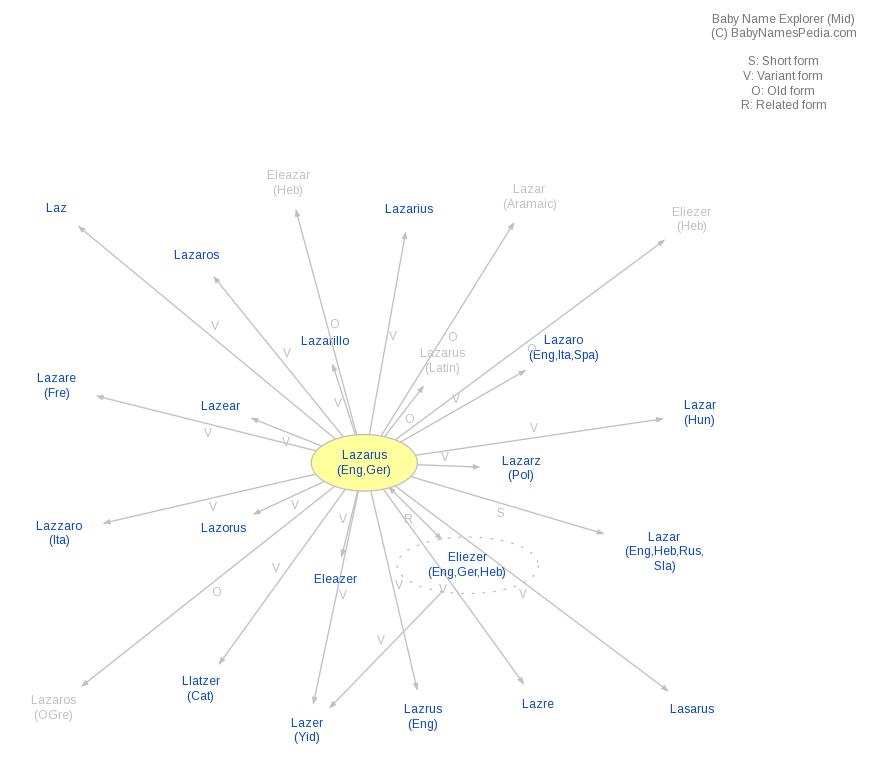