What does Leander mean?

[ 3 syll. lea-(n)der, le-and-er ] The baby boy name Leander is pronounced in English as Liy-AEN-DahR †. Leander is used predominantly in the English and German languages, and it is derived from Old Greek origins. The name is of the meaning strong brave man, man of people. Leandros (Old Greek) is an original form of Leander. The name is from the first element 'leon' or 'laos' with the second element 'aner'. The name was borne in Greek mythology by the youth who drowned in a storm on a regular swim across the Hellespont to visit his lover, the priestess Hero; their story is told in the 'Hero and Leander' myth. The name was later borne by the 6th century Spanish bishop Saint Leander, who converted the son of a Visigothic king from Arianism. The name was also used by the 17th century French playwright Moliere in his comedy dramas. The name saw a brief revival among Afro-Americans in the 20th century. The name Leandra (English and Italian) is the female version of Leander.

Leander has 17 variants that are used in English and other languages. Variants used in English include Ander, Cleander, Leand, Leande, Leandrew, Leanther, Leiandros, Leon, Liander, Liandre, and Liandro. The pet forms Lee and Leo (used in Dutch, French, German, and Italian too) are other English variants.

Leander is unusual as a baby name for boys. Its usage peaked modestly in 1908 with 0.014% of baby boys being given the name Leander. Its ranking then was #531. The baby name has since experienced a marked loss in popularity, and is currently of irregular use. Among the group of boy names directly linked to Leander, Leo was the most commonly used in 2018. 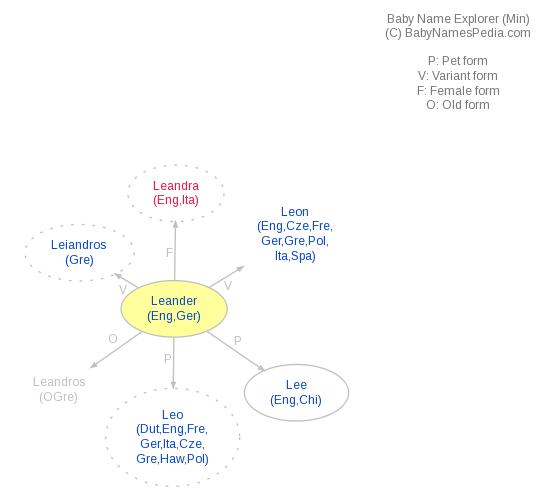