What does Leanna mean?

[ 3 syll. lea-(n)na, le-a-nna ] The baby girl name Leanna is pronounced as Liy-AE-N-aa- †. Leanna is used chiefly in English. Its origin is Latin, English, and French.

Leanna is a variant of Juliana in the English language.

Leanna is also a variant of the name Leanne (English).

Leanna is also a variant of the name Liana (English, French, German, Italian, and Portuguese) in the English language.

Leana (spelling variant in English) is a form of the name.

Leanna is a classic favorite. At present it is still somewhat popular as a baby girl name, but not as much as it was previously. The name's popularity grew from the 1930s up to the 1990s. At the modest height of its usage in 1990, 0.033% of baby girls were named Leanna. It had a ranking of #389 then. The baby name has dropped in popularity since then. In 2018, its usage was 0.018% and its ranking #827. Within the family of girl names directly related to Leanna, Juliana was the most widely used. In 2018, it was more commonly used than Leanna by 6 times. 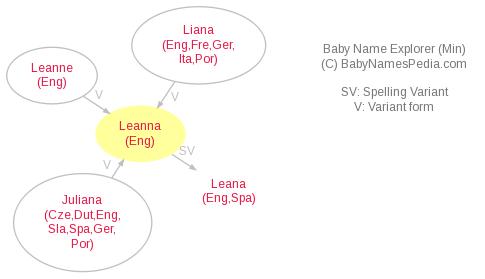