What does Leda mean?

[ 2 syll. le-da, led-a ] The baby girl name Leda is pronounced as LIY-Dah (English) †. Leda is an English and German name of Latin, Old Greek, Hebrew, and African-Swahili origin. Leda (Old Greek) is an old form of Leda. The name is from the ancient Lycian word for 'woman'. It was borne in Greek mythology by a queen who was seduced by Zeus in the guise of a swan, and subsequently gave birth to two sets of twins: Castor and Pollux, and Hermione and Helen of Troy.

In addition, Leda is a variant of the name Alida (Hungarian, Dutch, German, Italian, English, and Greek) in the English language.

Leda is also a variant of the name Laetitia (English and French) in the English language.

Leda is also a variant of the name Ledah (English).

Leda is also a variant of the name Leta (English).

Ledah, Leeda, and Lyda are variants of Leda.

Variant forms share the origin and meaning of Leda.

Other forms of Leda include the variant spellings Leida (English), Leyda (English), and Lida (Czech, Dutch, Greek, and English).

Leda is rare as a baby girl name. At the peak of its usage in 1904, 0.014% of baby girls were given the name Leda. It had a ranking of #515 then. The baby name has suffered a marked loss in popularity since then, and is today of very modest use. Out of all girl names in its family, Leda was nonetheless the most widely used in 2018. 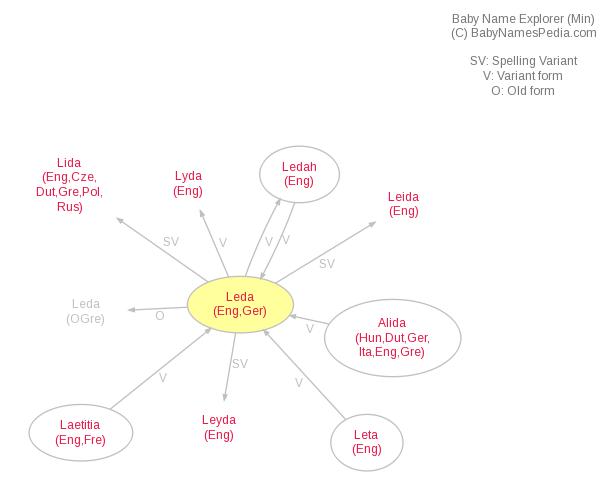