What does Leire mean?

[ syll. lei-re, le-ire ] The baby girl name Leire is pronounced as L-IHR- †. Leire is largely used in the Spanish language and its origin is Basque. The first name is derived from the name of the Monastery of San Salvador of Leyre in Spain, which derived its name from the Basque element 'legor' (meaning shed, hostel), probably in reference to the fact that monasteries often provided shelter for pilgrims and travellers. The first name could also be from the name of the village of Leire in Leicestershire, England.

The name Leyre (Spanish) is a variant transcription of Leire.

Leire is irregularly used as a baby girl name. It is not listed in the top 1000. 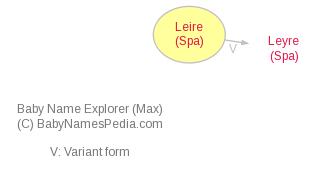