What does Len mean?

[ 1 syll. len, le-n ] The baby boy name Len is pronounced LehN †. Len has its origins in the Native American-Hopi, Native American, Scottish, and Germanic languages, and it is used largely in English and Scottish. From Native American-Hopi roots, its meaning is 'flute' - in this context, Len can be used in the English language.

Len is a shortening of the name Lenno.

Len is also a shortening of the English and Scottish Lennox.

Len is also an English shortening of the English, German, and Polish Leonard.

A form of Len is the name Lenn.

Len is rare as a baby name for boys. At the modest peak of its usage in 1906, 0.010% of baby boys were named Len. It ranked at #664 then. The baby name has since experienced a decline in frequency, and is used only on a very light scale now. In 2018, out of the group of boy names directly related to Len, Lennox was the most widely used. 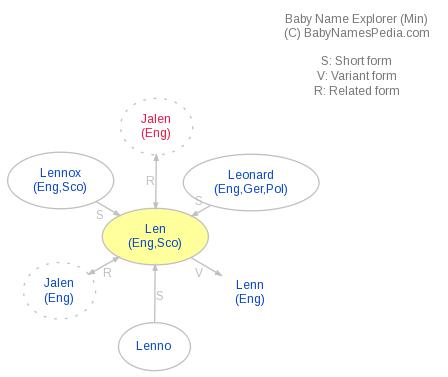