What does Lena mean?

[ 2 syll. le-na, len-a ] The baby girl name Lena is also used as a boy name, though the use for girls is far more popular. It is pronounced LEH-Naa (German) or LYEH-Naa (Russian) †.

Lena has 19 forms that are used in English and foreign languages. English forms of the name include Leena (also used in Indian), Lenah, Lencea, Lencee, Lencey, Lenci, Lencie, Lency, Lene, Lenee, Lenka, Lenna, Linah, and Lyna. Other English forms include the spelling variants Leina, Leyna, and Lina (also used in German, Italian, Russian, African, and Arabic). Forms used in foreign languages include the Dutch Lenie and the Latvian Liene.

Lena's language of origin is Latin. Here, the meaning is 'alluring one'.

In addition, Lena is a form (English) of the English, Irish, and Gaelic Eileen.

Lena is also a shortening of the English Eleanor.

Lena is also a form (Russian) of the English, French, and German Lilian.

Lena is also a form of Lina.

Lena is also a shortening (English, German, Polish, and Spanish) of Magdalena.

Lena is also a form (English) of the German, Polish, and English Marlene.

Lena is rather popular as a baby girl name, and it is also perceived as rather trendy. At the height of its usage in 1901, 0.478% of baby girls were named Lena. It had a ranking of #51 then. The baby name has seen a marked drop in frequency since then. In 2018, it ranked at #301 with a usage of 0.059%, having regained its popularity somewhat in the recent decade. Within all girl names in its family, Lena was the 2nd most popular after Eleanor. It was more frequently used than Lena by 5 times in 2018. 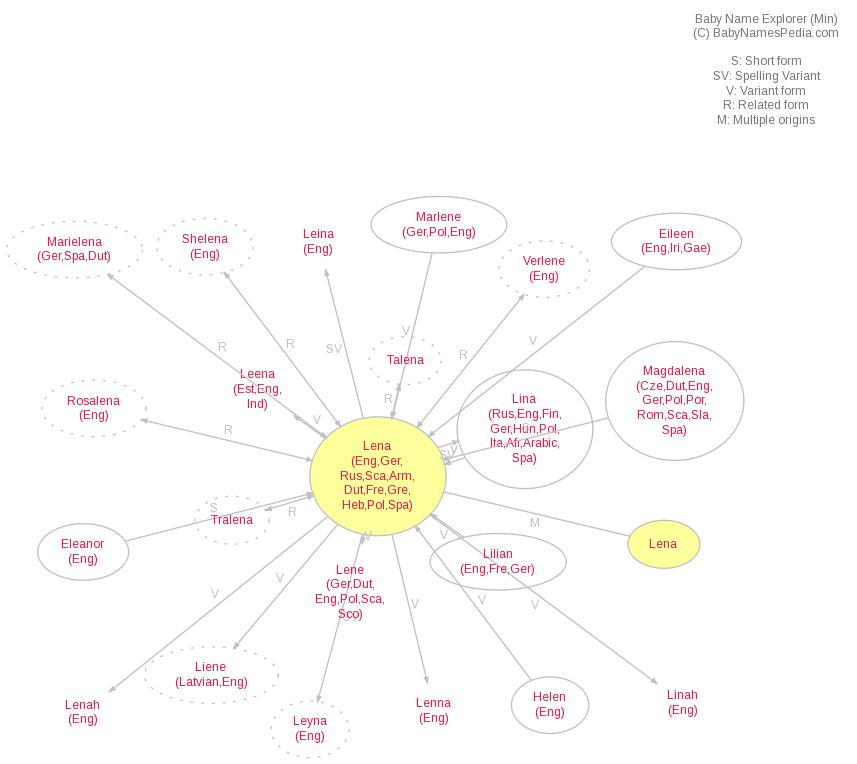