What does Lennox mean?

[ 2 syll. len-nox, le-nn-ox ] The baby boy name Lennox is pronounced LEHN-ayKS †. Lennox has its origins in the Scottish language. It is used largely in English and Scottish. The meaning of Lennox is 'field on river Leven'. It is from ach which means 'field' ; llyfn 'smooth, placid'. The first name is from the Scottish and English surname, which is derived from the name of the district of Lennox in Stirling, Scotland. The name of the distrct was originally Levenach, taken from the name of the local river Leven, which is of the Welsh llyfn (meaning 'smooth, placid'). As a title, Lennox was also known as a mormaerdom, earldom, and dukedom. The name was borne by the British composer Sir Lennox Berkeley (1903-1989).

Lennox is rather popular as a baby boy name, and it is also perceived as trendy. The name's popularity has been rising since the 2000s; before that, it was of only irregular use. At the modest peak of its usage in 2018, 0.045% of baby boys were named Lennox. It was #371 in rank then. Out of all boy names in its family, Lennox was the most commonly used in 2018. The name Lennox has primarily been a boy name, although it has also been given to girls in the last century. In 2017, 65% more boys than girls were given the name Lennox. 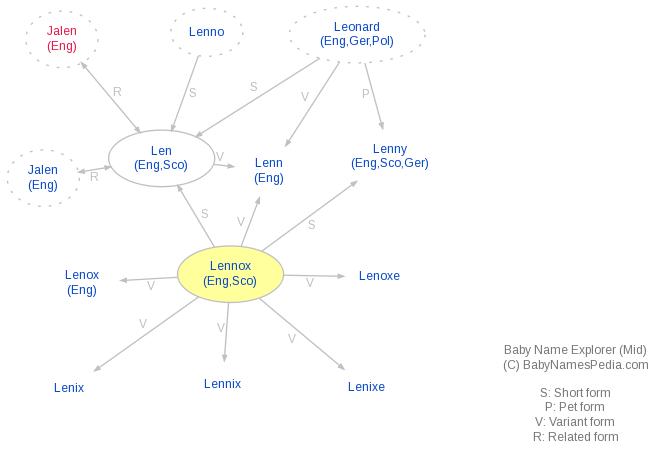