What does Leon mean?

[ 2 syll. leo(n), le-on ] The baby boy name Leon is pronounced Liy-AAN in English or LEH-aoN in German and Polish †. Leon has its origins in the Old Greek, Latin, and Germanic languages, and it is used largely in English, Czech, French, German, Greek, Polish, Italian, and Spanish.

Leon is a derivative (English) of the English and German Leander.

Leon is also a shortening (English, French, German, Greek, Italian, Polish, and Spanish) of the English, German, and Polish Leonard.

Leon is also a derivative of the English, French, Polish, and Spanish Napoleon.

Leon is an all-time favorite. Today it is still popular as a baby name for boys, though not to the extent it was previously, and it is also perceived to be trendy. At the modest height of its usage in 1918, 0.233% of baby boys were named Leon. It ranked at #77 then. The baby name has since experienced a substantial drop in frequency. In 2018, it ranked at #238 with a usage of 0.083%, having regained some lost ground in the recent decade. Within all boy names in its group, Leon was the 2nd most popular after Leo. It was used 4 times more than Leon in 2018. 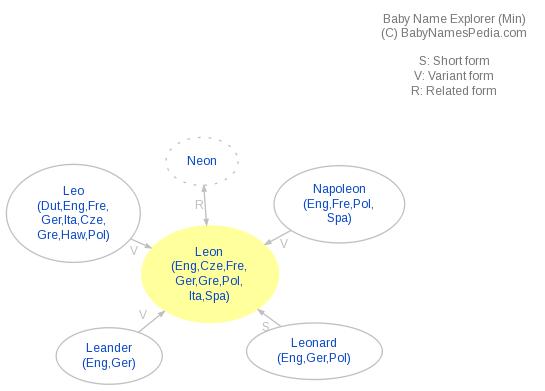