What does Leona mean?

[ 3 syll. leo-na, le-ona ] The baby girl name Leona is pronounced Liy-OW-Nah (English) or LEH-ow-Naa (German) †. Leona has its origins in the Old Greek and Latin languages. It is used largely in English and German. Latin origin: It is derived from the word leo with the meaning 'lion'. The generic name has been used by various popes. Also from the Roman nickname.

In addition, Leona is a form of the English Helen.

Leona is also an English form of the English and Italian Leandra.

What are the Variant Forms of Leona?

The name Leona is used to a great extent; it has 53 forms that are used in English and foreign languages. English forms of the name include Leeona, Leeowna, Lenia, Lenna, Leoine, Leola, Leoma, Leonarda, Leonda, Leondra, Leondrea, Leone, Leonea, Leonee, Leonel, Leonela, Leonella, Leonelle, Leonia, Leonice, Leonicia, Leonila, Leonine, Leonissa, Leonlina, Leonline, Leontin, Leontina, Leontine, and Leontyna. Other English forms include the shortenings Leo and Lona (used in German too), the familiar forms Lennie and Leonie (used in German too), and the spelling variant Leonna.

Leona is an all-time favorite. Currently it is still rather popular as a baby girl name, but to a lesser degree than it was before. At the peak of its usage in 1905, 0.349% of baby girls were named Leona. It was #69 in rank then. The baby name has suffered a substantial drop in frequency since then, and is in recent times of only very modest use. In 2018, it ranked at #511 with a usage of 0.033%. Out of the family of girl names directly related to Leona, Helen was the most frequently used. It was 23% more commonly used than Leona in 2018. The name Leona has primarily been a baby girl name, although it has also been given to boys in the last century. In 1910, 47 times more baby girls than boys were given the name Leona. 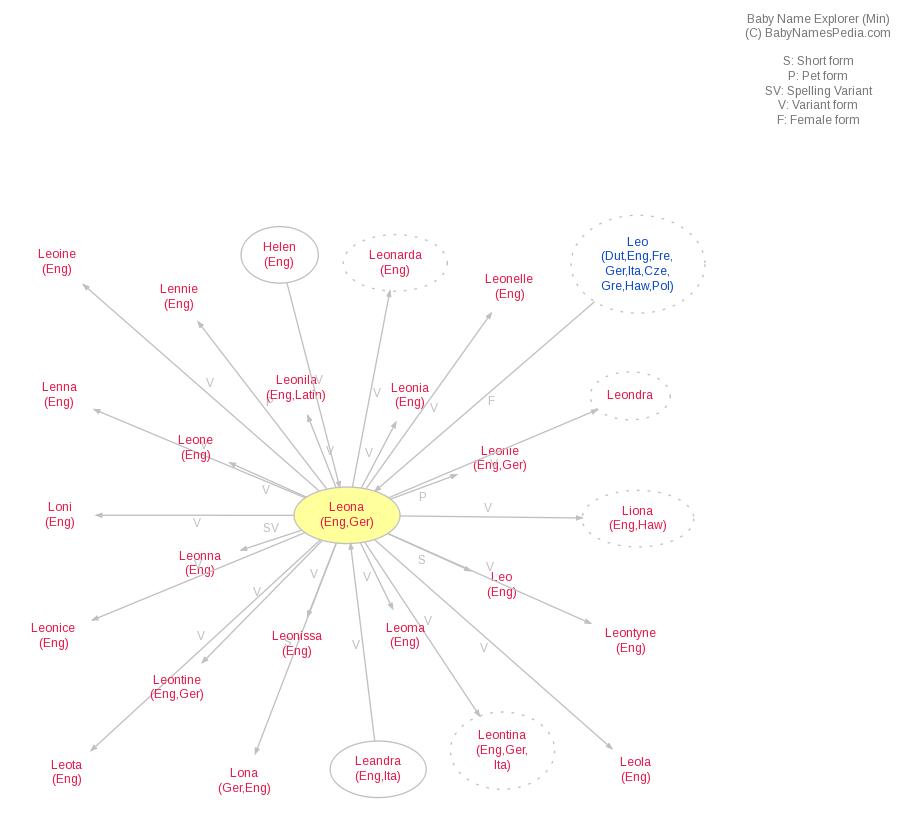