What does Leonardo mean?

[ 4 syll. leo-nar-do, le-ona-rdo ] The baby boy name Leonardo is pronounced Liy-ah-NAAR-Dow in English or Leh-ow-NAAR-Dow in Italian and Spanish †. Leonardo's origin is Latin and Germanic, and its use, Portuguese, English, Italian, and Spanish.

Leonardo is a variant form of Leo in the Portuguese language.

Leonardo is also a variant form of the English, German, and Polish Leonard in the English, Italian, Portuguese, and Spanish languages.

Leonardo is popular as a baby boy name, and it is also perceived as trendy. The name has been increasing in popularity since the 1940s. At the modest height of its usage in 2018, 0.218% of baby boys were named Leonardo. It was #92 in rank then. Within all boy names in its family, Leonardo was the 2nd most popular after Leo in 2018. It was 60% more popular than Leonardo in that year. 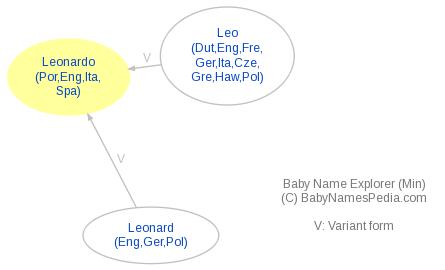