What does Leonid mean?

[ 4 syll. leo-nid, le-on-id ] The baby boy name Leonid is pronounced as LAYEH-aa-Niy-D, LEY-owNahD or LIY-owNahD †. Leonid is used chiefly in the Russian and German languages, and its origin is Germanic and Old Greek. Old Greek origin, German and Russian use: It is from the elements 'leon' meaning lion ; 'ides'. The name is from Leonidas (Old Greek), a Spartan form of Leonides (Old Greek). The name Leonides was borne by the king of Sparta who died defending the pass at Thermopylae from the Persians in 480 BC. His name was derived from Leon, his grandfather's name. The name was also borne by two early saints.

In addition, Leonid is a variant of the name Leonard (English, German, and Polish) in the Russian language.

The name Leonida (Italian) is the female form of Leonid.

Lenid, Leonide, Leonido (Italian and Spanish), and Lyonya are variants of Leonid.

Leonid is not regularly used as a baby name for boys. It is not listed in the top 1000 names. Among the group of boy names directly linked to Leonid, Leonard was the most popular in 2018. 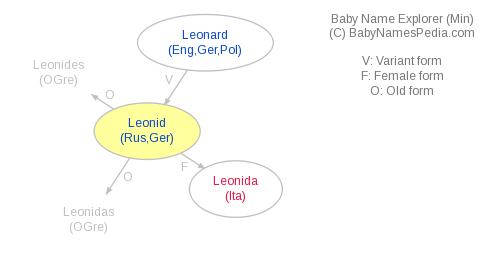