What does Leroy mean?

[ 2 syll. le-roy, ler-oy ] The baby boy name Leroy is pronounced as LIY-R-oy †. Leroy is used chiefly in English and it is derived from French origins. The meaning of Leroy is the king. It is derived from the word 'roi' which is of the meaning king. The name was initially used as a byname, possibly for servants of royalty. The name was adopted by English speakers in the 19th century, starting from the USA; it is today common among Afro-Americans.

Leroy is a classic favorite. At present it is still a somewhat popular baby boy name, but not to the degree it was in the past. Its usage peaked modestly in 1935 with 0.367% of baby boys being named Leroy. It was #50 in rank then. The baby name has fallen from favor since then, and is of infrequent use in recent times. In 2018, its usage was only 0.013% and its ranking #875. Among the family of boy names directly related to Leroy, Roy was the most popular. In 2018, the name was twice as popular as Leroy. 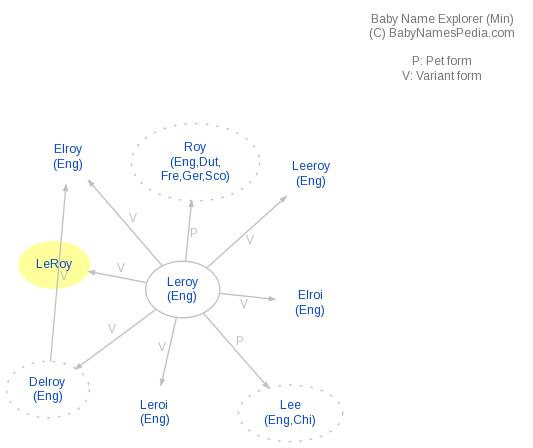