What does Leslie mean?

[ 2 syll. le-slie, les-l-ie ] The baby boy name Leslie is also used as a girl name, with the latter form being much more common. It is pronounced as LEHSLiy- or LIHZLiy- †. Leslie is used predominantly in the English and German languages, and it is derived from Celtic origins. The name is of the meaning garden of hollies. It is derived from the elements 'leas' meaning garden ; 'cuilinn' holly. The first name is from the English and Scottish surname, which is from the place name of Lesslyn in Aberdeenshire, Scotland. Members of the prominent Scottish earldom family were closely linked to the Scottish royal house of Stewart; a later member David Leslie (1600-1682) was however a general in the English and Scottish Civil Wars who helped defeat the royalists but eventually switched sides. The first name initially appeared as Lesley in the 18th century Robert Burns poem Bonnie Lesley. It grew popular by the late 19th century; it was also later promoted by the fame of the British film actor Leslie Howard (1890-1943), who acted in the well-known film Gone with the Wind (1939).

Leslie is an unusual baby name for boys. Its usage peaked in 1902 with 0.189% of baby boys being given the name Leslie. Its ranking then was #85. The baby name has since steeply declined in popularity, and is currently of very modest use. Among all boy names in its group, Leslie was nonetheless the most commonly used in 2018. Though Leslie is currently more often than not a girl name, there was a period before 1945 when more boys were given the name. From 1946 on, increasingly more girls than boys were named Leslie. In 1997, girls named Leslie outnumbered boys by 18 times. 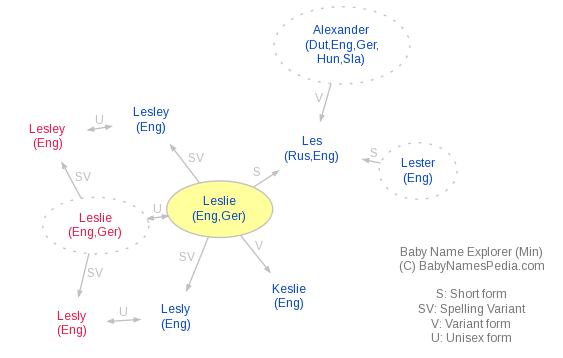