What does Lewis mean?

[ 2 syll. le-wis, lew-is ] The baby boy name Lewis is pronounced LUW-ihS- †. Lewis is of Celtic and Germanic origin. It is used mainly in the English language.

Lewis is a variant of Llewellyn (Welsh).

Lewis is also a variant spelling of Louis (English and French) in the English language.

Lewis is an all-time favorite. At present it is still rather popular as a baby boy name, but not as much as it was previously. At the height of its usage in 1908, 0.294% of baby boys were given the name Lewis. It had a ranking of #61 then. The baby name has markedly fallen in popularity since then, and it is used only on a modest scale in recent years. In 2018, it ranked at #546 with a usage of 0.026%. Within the family of boy names directly linked to Lewis, Louis was the most regularly used. The name was thrice as popular as Lewis in 2018. 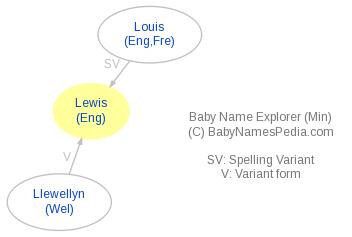