What does Lilith mean?

[ 2 syll. li-lit(h), lil-i-th ] The baby girl name Lilith is also used as a boy name, though it is far more popular for girls. It is pronounced LIHL-ih-TH in English †. Lilith's origin is Assyrian and English, and its use, Arabic, English, and Hebrew. Assyrian origin: It is derived from lilitu meaning 'of the night' ; litith. See Lilith for more information.

In addition, Lilith is a form (Arabic, English, and Hebrew) of the English Lily.

Lilith has 14 forms that are used in English and foreign languages. English forms of the name include Lilithe, Lillyth, Lilyth, Lilythe, Lylith, Lylithe, Lyllith, Lyllyth, and Lylyth. Other English forms include the contracted form Lil, the diminutive Lilly (used in Latin and as well), and the spelling variant Lillith (used in Arabic and Hebrew as well). Forms used in foreign languages include the Hebrew Lilis and the Hebrew Lilit.

Lilith is rather popular as a baby girl name, and it is also regarded as trendy. The name has been increasing in popularity since the 2000s; prior to that, it was of only sporadic use. At the modest height of its usage in 2017, 0.034% of baby girls were named Lilith. It had a ranking of #491 then. In 2018, it ranked at #521 with a usage of 0.032%. Within the family of girl names directly related to Lilith, Lily was the most frequently used. It was more frequently used than Lilith by 10 times in 2018. Lilith has in the last century been mainly given to baby girls. 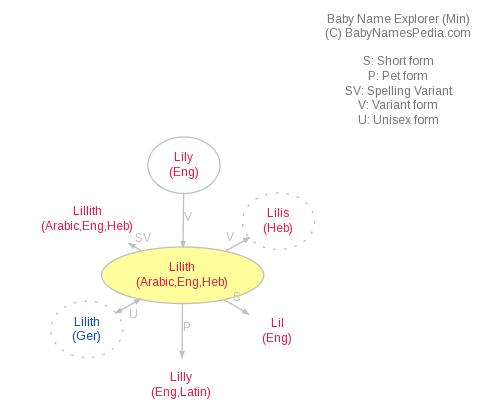