What does Lilliana mean?

[ 4 syll. lil-lia-na, li-lli-ana ] The baby girl name Lilliana is pronounced LihLLiy-aaNNuw- †. Lilliana's language of origin is Latin and it is predominantly used in English.

Lilliana is a derivative (English) of the English, French, and German Lilian.

Lilliana is also a derivative (English) of Liliana.

Lilliana is a rather popular baby girl name. The name has been increasing in popularity since the 1990s; prior to that, it was of only infrequent use. At the modest height of its usage in 2013, 0.064% of baby girls were named Lilliana. It was #262 in rank then. In 2018, it ranked at #310 with a usage of 0.058%, and it was the 2nd most popular after Liliana, within all girl names in its family. The name was thrice as popular as Lilliana in 2018. 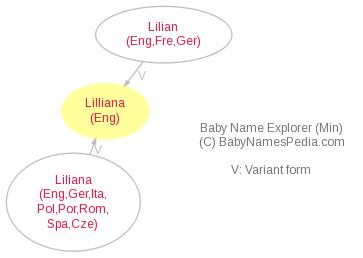