What does Lily mean?

[ 2 syll. li-ly, lil-y ] The baby girl name Lily is pronounced as LIHL-iy- †. Lily is mainly used in English, and its language of origin is Latin and English. English origin: It is from the elements 'lily' ; 'lilium' meaning lily. The first name is derived from the flower name, which is ultimately of the Latin 'ilium'. The flower is a symbol of purity associated with the Virgin Mary, and it is also well-known from a verse in the Sermon on the Mount to 'consider the lilies of the field'. A later source of the name could be the German name Lilli, which is itself from Elizabeth. The first name Lily was widely adopted by English speakers in the mid-19th century amidst the enthusiasm for flower and plant names. Its popularity saw another boost from the song Lily of Laguna (1898), performed by Eugene Stratton and G H Elliott. The name gradually fell into decline by the mid-20th century, due to a growing perception then that it was becoming old-fashioned. In recent times, it has become more popular again.

In addition, Lily is a diminutive form of the English, French, and German name Lilian in the English language.

The name Lily is used to a great extent; it has 38 variant forms that are used in English and other languages. English variant forms include Leelee, Lila, Lilas, Lilch, Liliana, Lilianne, Lilias, Lilie, Lilika, Liliosa, Lilith (used in Arabic and Hebrew too), Lilium, Lilla, Lillah, Lilley, Lilli (used in German too), Lillia, Lillika, Lillita, Lilyan, Lilyanne, Lilybel, Lilybell, Lilybella, and Lilybelle. Other English forms include the diminutive forms Lil, Lillie, and Lilly, and the spelling variants Lili (used in German, Russian, and Dutch too) and Lillee. 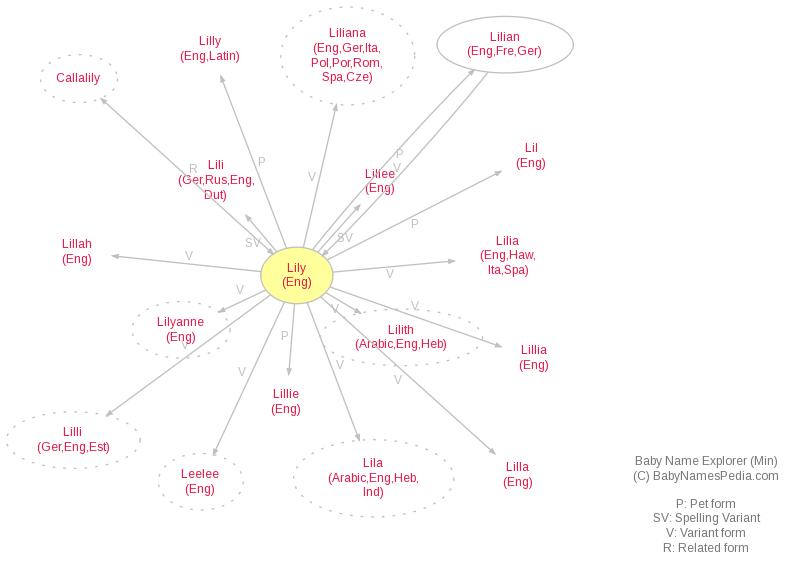