What does Livia mean?

[ 3 syll. li-via, liv-ia ] The baby girl name Livia is pronounced as LIHV-iy-aa- †. Livia is of Old Norse, Latin, and Hebrew origin. It is used mainly in English, German, Hebrew, and Italian. Latin origin: It is derived from the word lividus which is of the meaning 'bluish, lead-colored'. The name appeared in various English literature works from the late 16th century, including the William Shakespeare play Romeo and Juliet (1595).

In addition, Livia is a form of the German, Latin, Scandinavian, and English Liv.

Livia is also a Hebrew form of the English and Hebrew Liviya.

Livia is also an English and Hebrew familiar form of the English, German, and Italian Olivia.

Livia is the feminine equivalent of the German Livius.

The contracted form Liv (German, Latin, Scandinavian, and English), and the familiar forms Livvy (English) and Livy (English) are other variants of the name.

Livia is rather popular as a baby girl name. The name has been growing in popularity since the 2000s. Its usage peaked modestly in 2018 with 0.023% of baby girls being named Livia. It was #676 in rank then. Among all girl names in its family, Livia was the 2nd most popular after Olivia in 2018. It was 42 times more regularly used than Livia in that year. 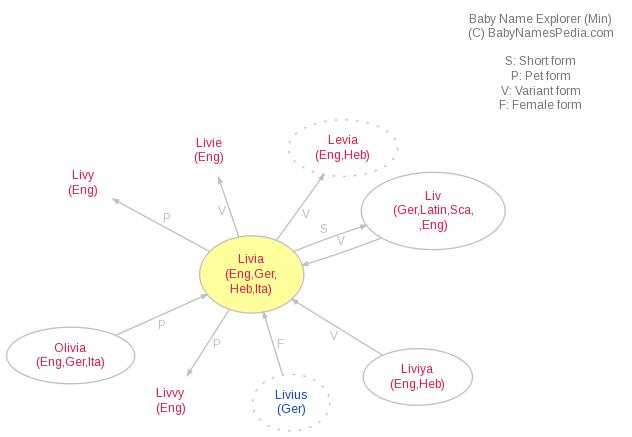