What does Lizabeth mean?

[ 3 syll. li-za-bet(h), liz-abe-th ] The baby girl name Lizabeth is pronounced as LIHZ-aa-Beh-TH †. Lizabeth is used mostly in English and its language of origin is Hebrew.

Lizabeth is a contracted form (English) of the English, Greek, and Hebrew name Elizabeth.

Lizabeth is also a derivative of the English, Hungarian, Russian, and Polish name Liza.

Lizabeth is also a derivative of the English name Lizbeth.

Lizabeth is unusual as a baby name for girls. Its usage peaked modestly in 1958 with 0.009% of baby girls being named Lizabeth. Its ranking then was #716. The baby name has since experienced a decline in frequency, and is currently of sporadic use. In 2018, among the group of girl names directly related to Lizabeth, Elizabeth was the most commonly used. 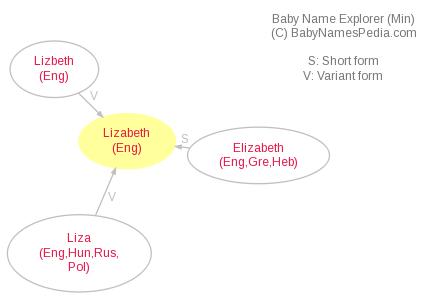