What does Llewellyn mean?

Llewellyn is used mostly in Welsh and it is of Celtic origin. Old forms of the name include Lugobelinos (Celtic) and Lugubelenus (Old English). The name is most likely derived from the Celtic Lugubelenus, although it has sometimes been considered to be of Welsh roots. Lugubelenus is from the combination of the names of the Celtic gods Lug and Belenus. The name was borne by several kings and princes such as Welsh ruler Llywelyn the Great (1173-1240), and by a number of Welsh poets.

The origin and thus the meaning of the name Llewellyn is inherited by all variant forms.

Llewellyn's language of origin is Welsh. Here, the meaning is 'shining one; lion-like; leader; likeness'. Based on the first element of the name, it is sometimes taken to mean 'shining, bright' ultimately from the Indoeuropean leuk, like its short form Llew, or else it could be of the Welsh llyw or eilun (meaning 'likeness, image, idol').

Llewellyn is uncommon as a baby name for boys. At the modest height of its usage in 1910, 0.009% of baby boys were given the name Llewellyn. Its ranking then was #722. The baby name has since experienced a decline in popularity, and is of only irregular use now. Within the group of boy names directly linked to Llewellyn, Lewis was the most popular in 2018. 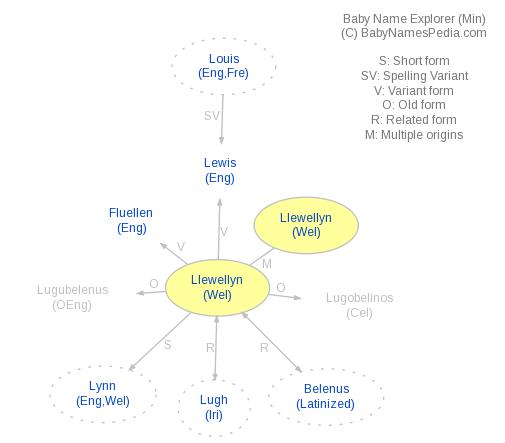