What does Lola mean?

[ 2 syll. lo-la, lol-a ] The baby girl name Lola is pronounced LOW-Lah in English or LOW-Laa in Spanish †. Lola's language of origin is Germanic, Spanish, Latin, and French. It is predominantly used in the Spanish, English, Hawaiian, and Italian languages.

Lola is a familiar form of Carlotta (Italian, English, and Spanish) in the Spanish language.

Lola is also a variant of Caroline (English, French, and Scandinavian) in the Spanish language.

Lola is also a variant of Charlotte (French, German, Dutch, English, and Scandinavian) in the English language.

Lola is also a familiar form of Dolores (English, German, and Spanish) in the English and Spanish languages.

Lola is also a variant of Laura in the Hawaiian language.

Lola is also a familiar form of Lourdes (English and Spanish) in the English, Italian, and Spanish languages.

Lolita (familiar form in Spanish and English) is a variant of Lola.

Lola is a popular baby girl name. At the modest height of its usage in 1904, 0.213% of baby girls were given the name Lola. It was #99 in rank then. The baby name has fallen from favor since then, and it is used only on a very light scale in recent years. In 2018, it ranked at #239 with a usage of 0.073%, but it was nonetheless the 3rd most popular after Charlotte and Caroline, within all girl names in its family. Charlotte was 10 times more frequently used than Lola in 2018. The name Lola has been primarily given to girls, although it has also been used as a boy name in the last century. In 1902, 38 times as many girls than boys were given the name Lola. 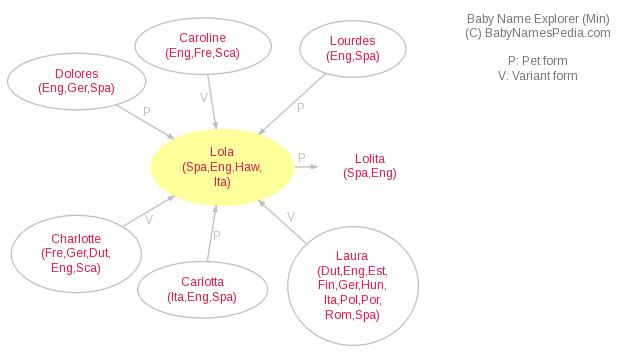