What does Lona mean?

[ 2 syll. lo-na, lon-a ] The baby girl name Lona is pronounced as LOW-Naa- †. Lona is mainly used in the German and English languages, and its language of origin is Old Greek, Hungarian, and Latin.

Lona is a contraction of the English, German, and Polish name Apollonia in the German language.

Lona is also a contraction of the English and German name Leona.

See also the related forms, the name Chalonna and the name Shalona.

Lona is unusual as a baby name for girls. Its usage peaked modestly in 1902 with 0.034% of baby girls being given the name Lona. It ranked at #319 then. The baby name has since markedly declined in popularity, and is today used on a very light scale. Among the group of girl names directly linked to Lona, Leona was the most widely used in 2018. 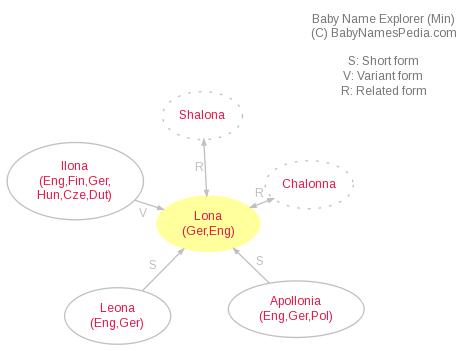