What does Loredana mean?

[ 4 syll. lo-re-da-na, lor-ed-ana ] The baby girl name Loredana is pronounced as LowReh-D-AHNaa- †. Loredana has its origins in the Italian language. It is used largely in German, Italian, and Romanian. The name was first coined by Luciano Zuccoli for the heroine in his novel L'amore de Loredana (1908); his source for the first name could have been the Venetian surname Loredan, from the place name Loreo in Veneto, which is itself of the Latin root word lauretum.

Variant forms inherit the origin and meaning of Loredana.

Loredana is not popular as a baby girl name. It is not listed within the top 1000. 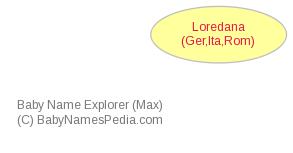