What does Lorena mean?

[ 3 syll. lo-re-na, lor-ena ] The baby girl name Lorena is pronounced LowREHN-aa- or LowRIY-N-aa- †. Lorena is of Latin origin. It is used mainly in the English, Italian, and Spanish languages. The name was first made known by the song Lorena (1856); the lyrics were written by Rev Henry Webster, who supposedly adapted the name from Lenore, the name of the departed love in Edgar Allan Poe's poem The Raven. In recent times, the name has been associated with Lorena Bobbitt (1967), the wife who became known for severing the penis of her abusive husband John Bobbitt.

In addition, Lorena is an English and Italian variant transcription of Laura.

Lorena is also an English variant transcription of Lauren (English and French).

Variant forms inherit both the origin and meaning of Lorena.

Lorena is uncommon as a baby girl name. In 1900, 0.056% of baby girls were given the name Lorena. It had a ranking of #239 then. The baby name has markedly fallen in popularity since then, and is of only infrequent use now. Within the family of girl names directly linked to Lorena, Lauren was the most popular in 2018. 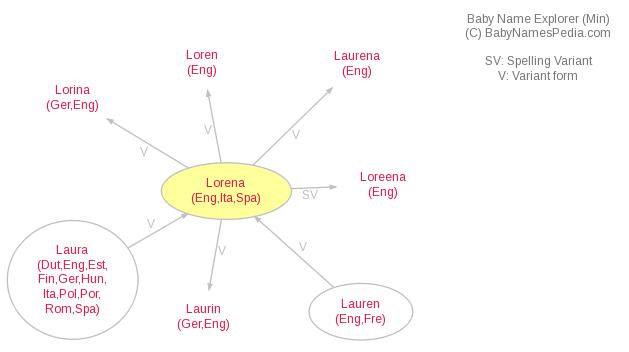