What does Lorna mean?

Lorna's language of origin is Scottish. It is predominantly used in English and Scottish. The meaning of Lorna is 'from Lorne; Marquis of Lorne'. The name was first created by the British novelist R. D. Blackmore for the titular heroine of his popular romantic novel Lorna Doone (1869). He derived it from a Scottish place name in Argyll called Lorn, or Latharna in Gaelic. He could also have intended that the name be associated with the title Marquis of Lorne, or else he could have derived it from Old English. Lorna is the feminine form of the English Lorne.

Lorna is of Old English origin. It is derived from the element lorn meaning 'lost, forsaken'.

In addition, Lorna is a form of Laura in the English language.

Lorna is also a form of the Spanish, Italian, Russian, English, German, and Slavic Lora.

Lorna is a rare baby name for girls. At the modest peak of its usage in 1942, 0.037% of baby girls were given the name Lorna. Its ranking then was #302. The baby name has since fallen from favor, and is currently of only very light use. In 2018, out of the group of girl names directly linked to Lorna, Laura was the most widely used. 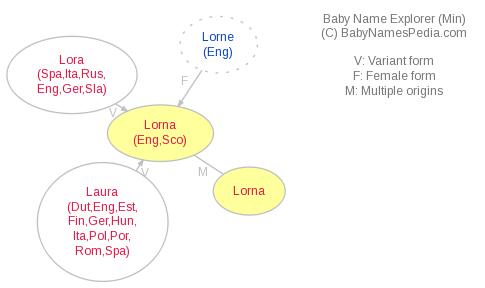