What does Lothar mean?

[ 2 syll. lot-har, lo-th-ar ] The baby boy name Lothar is pronounced as LAAT-aaR †. Lothar is used predominantly in the German language and it is derived from Germanic origins. A two-element name, it is derived from the elements 'hlud' meaning fame, loud ; 'heri' army, warrior. Chlothar (Germanic) is an original form of Lothar. The name was borne by an 8th century French saint who founded the monastery Saint-Loyer-des-Champs in Orne. As a Frankish royal name, it was borne by two Holy Roman Emperors, notably Lothar I (795-855), also known as Lothair, who gave his name to the province of Lotharingia, meaning 'land of the people of Lothar', a province of which the modern day region of Lorraine is a part.

In addition, Lothar is a variation (German) of the name Louis (English and French).

Lothar is also a variation of the name Luther (English).

Lothar is a rarely used baby name for boys. It is not listed in the top 1000 names. In 2018, among the group of boy names directly linked to Lothar, Louis was the most popular. 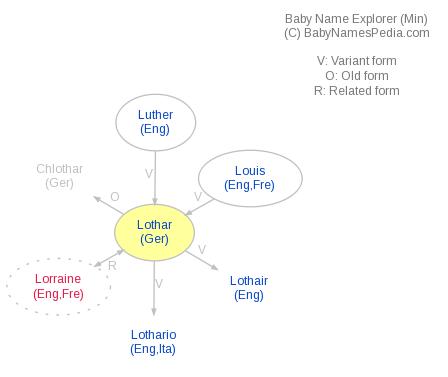