What does Louis mean?

[ 2 syll. lo-uis, lou-is ] The baby boy name Louis is pronounced as LUW-ihS (English) or Luw-IY (French) †. Louis is used predominantly in the English and French languages, and its origin is Germanic. A two-element name, it is derived from the elements 'hlud' meaning fame, loud ; 'wig' fighter, warrior. Chlodwig (Germanic) and Hludwig (Germanic) are old forms of Louis.

Various forms of the name were used by royal and noble families in France and Germany. The name Clovis was borne by Clovis I (466-511), the first king of the Franks; he ended Roman rule over Gaul and founded the Frankish or French monarchy. The name Louis was later borne by eighteen kings of France, including Louis the Pious (778-840), the son of Charlemagne who was both Holy Roman Emperor and King of France.

The Normans brought the name into medieval England, where it was Anglicized as Lewis. The French form Louis became more popular with English speakers from the 18th century. The form Ludwig was used in the medieval period by German counts of Württemberg and by kings of Bavaria from the 19th century; it was also borne by the famous German composer Ludwig van Beethoven (1770-1827). In the early 20th century, the form Clovis saw a brief revival from the popular short stories The Chronicles of Clovis (1911) by the British author Saki. In the Highlands, Ludovic is used as an Anglicized version of the Gaelic Maol Dòmhnaich, meaning 'devotee of the Lord'. The forms Louis and Lewis are used as Anglicized form of Gaelic Laoiseach and Lughaidh. The name Louise (Dutch, English, French, and German) is the female version of Louis.

What are the Variant Forms of Louis?

Louis is a classic favorite. Today it is still popular as a baby name for boys, though to a lesser extent than it was before, and it is also viewed as trendy. At the peak of its usage in 1914, 0.804% of baby boys were given the name Louis. Its ranking then was #20. The baby name has since markedly declined in popularity. In 2018, its usage was 0.071% and its ranking #263, appearing with somewhat increasing regularity in the recent decade. Out of all boy names in its group, Louis was the 2nd most popular after Luis. In 2018, the name was twice as popular as Louis. Louis has predominantly been a baby boy name, though in the past century it has also been used for girls. In 1932, baby boys named Louis outnumbered girls by 94 times. 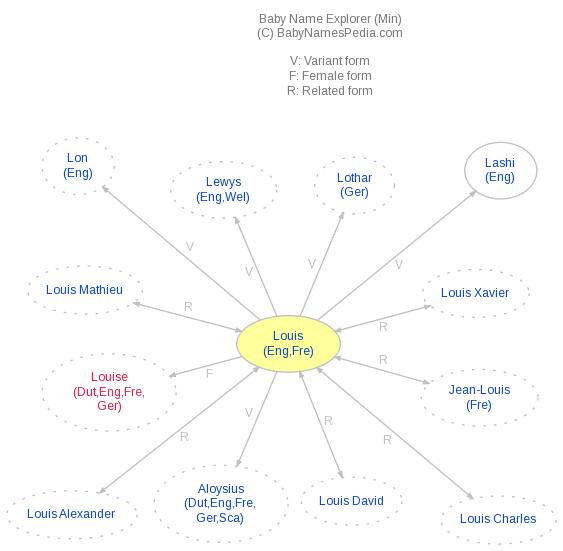