What does Louise mean?

[ 2 syll. lo-ui-se, lou-ise ] The baby girl name Louise is also used as a boy name, though it is far more popular for girls. It is pronounced Luw-IYZ in English and French †. Louise's origin is Germanic, and its use, Dutch, English, French, and German. It is a two-element name derived from hlud and wig with the meanings 'fame, loud' and 'fighter, warrior' respectively. The name was borne by Saint Louise de Marillac (1591-1660), the co-founder of the Daughters of Charity. The name was also borne by Louise de Keroualle (1649-1734), who became the mistress of Charles II of England and introduced the name to English speakers. The form Louisa took over in popularity by the late 18th century, but by the 19th century, Louise returned as the more popular form of the name among English speakers. Louise is the feminine equivalent of the English and French Louis.

What are the Variant Forms of Louise?

Louise is an all-time favorite. Currently it is still somewhat popular as a baby girl name, but not to the degree it was previously. At the height of its usage in 1912, 0.872% of baby girls were named Louise. It had a ranking of #17 then. The baby name has fallen out of favor since then, and is of only sporadic use in recent times. In 2018, it ranked at #800 with a usage of 0.018%, but it was nevertheless the 3rd most popular after Eloise and Louisa, within all girl names in its family. Eloise was more regularly used than Louise by 5 times in 2018. Louise has in the last century been mainly given to baby girls. There were 90 times more baby girls than boys who were named Louise in 1936. 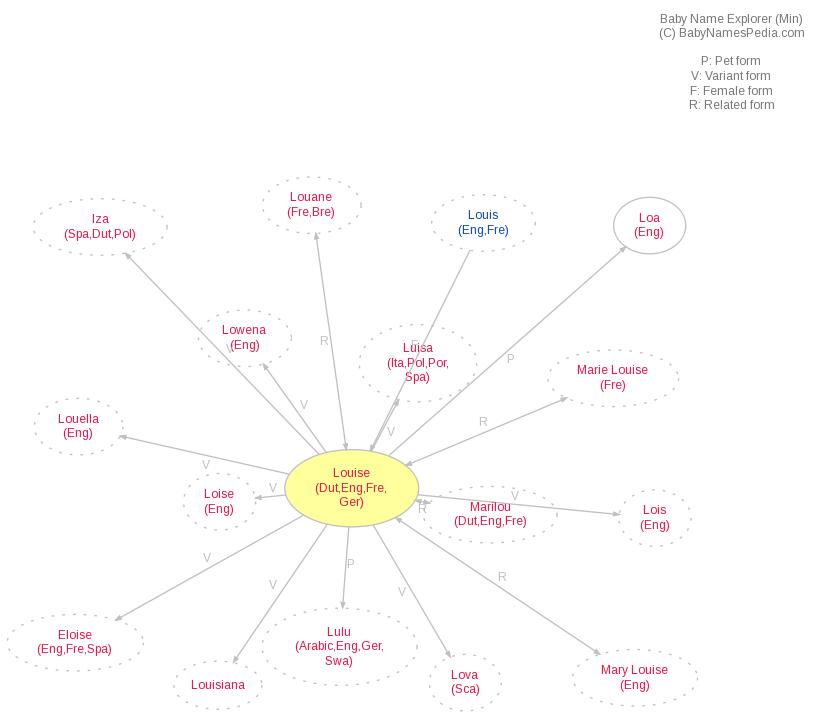