What does Lourdes mean?

[ 1 syll. lou-(r)des, lo-urd-es ] The baby girl name Lourdes is also used as a boy name, though it is far more popular for girls. It is pronounced LAORDZ (English), LUHRD (French), or LUWR-DehS (Spanish) †. Lourdes has its origins in the French language. It is used largely in English and Spanish. The first name is derived from the town of Lourdes in southwestern France, where a famous shrine was built after a local peasant girl Bernadette Soubirous saw apparitions of the Virgin Mary in 1858. Traditionally, the name Mary was considered too sacred to use, therefore girls were often christened with other associated names. The name is used mainly by Roman Catholics. It has in recent times been famous as the name given by Madonna to her daughter, Lourdes 'Lola' Maria (1996).

The familiar forms Lola (English, Italian, and Spanish), Lolita (Spanish), Lula (English), and Luli (English) are other variants of the name.

Lourdes is rare as a baby girl name. At the modest peak of its usage in 1968, 0.018% of baby girls were named Lourdes. It was #554 in rank then. The baby name has dropped out of favor since then, and is of only sporadic use now. In 2018, out of the family of girl names directly related to Lourdes, Lola was the most commonly used. Lourdes has primarily been a baby girl name in the last century. 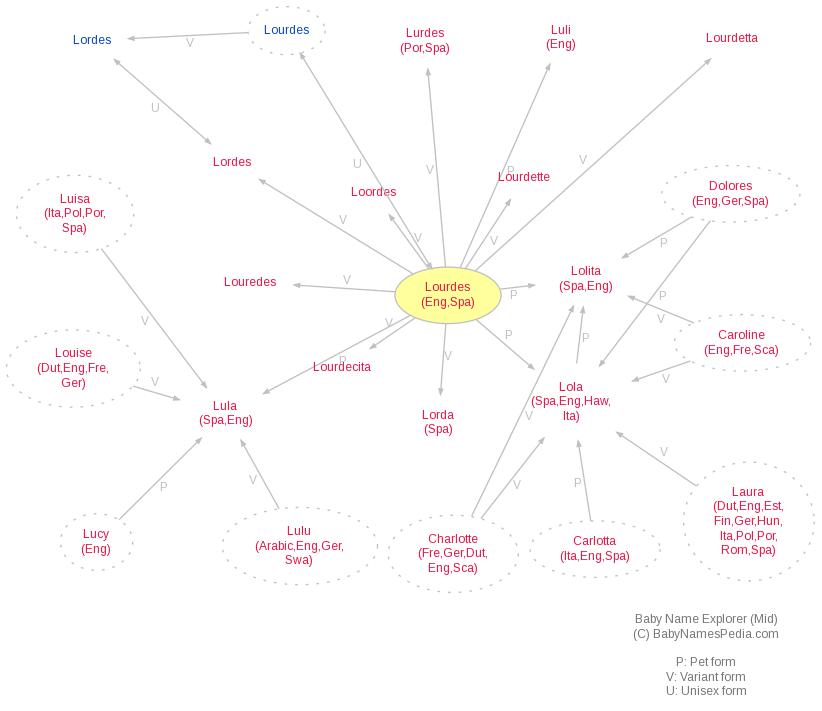