What does Lucetta mean?

[ 3 syll. lu-cet-ta, luc-e-tta ] The baby girl name Lucetta is pronounced as L-uwSEHTTaa †. Lucetta is largely used in the English language and it is derived from Latin origins. The name is an elaboration of Lucia or Lucy with the originally Itallian suffix '-etta'. It has appeared as the name of a minor character in Shakespeare's play The Two Gentlemen of Verona (1594), and it saw a brief revival later in the 19th century.

Variant forms inherit the origin and meaning of Lucetta.

Lucetta is rare as a baby girl name. It is listed outside of the top 1000. In 2018, among the family of girl names directly linked to Lucetta, Lucy was the most frequently used. 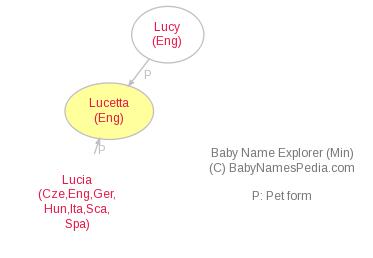