What does Lucille mean?

[ 2 syll. lu-cil-le, luc-i-lle ] The baby girl name Lucille is pronounced as Luw-SIY-L †. Lucille is used mostly in the English and French languages. Its language of origin is Latin. The name is derived from Lucilla (Latin), a diminutive of Lucia borne by various minor early saints. It was first adopted by English speakers in the 16th century, appearing as the name of Euphues' love interest Lucilla in John Lyly's prose romance 'Euphues, The Anatomy of Wit' (1578). The name Lucille was adopted by English speakers in the 19th century, and it soon overshadowed the earlier form.

Lucille is a familiar form (English and French) of the English name Lucy.

Lucille is a widely used name; it has 25 derivatives that are used in English and other languages. Derivatives of Lucille used in English include Ceely, Cici, Loucille, Lu, Luceil, Luciela, Lucilia, Lucilla (also used in German, Italian, and Spanish), Lucja, Lucyle, Lucylle, Lucyna, Luseele, Luselle, Lusil, Lusile, Lusille, Luzel, Luzell, and Luzelle. The familiar forms Lucy and Lulu, and the variant spelling Lucile (also used in French) are other English forms. Foreign derivatives include Lucila (Spanish) and Lucine (Basque).

The origin and meaning of the name Lucille is inherited by all variant forms.

Lucille is popular as a baby girl name, and it is also considered trendy. Its usage peaked in 1915 with 0.684% of baby girls being given the name Lucille. It was #29 in rank then. The baby name has experienced a marked fall in popularity since then. In 2018, its usage was 0.060% and its ranking #295, having regained some lost ground in the recent decade. Among the family of girl names directly linked to Lucille, Lucy was the most frequently used. In 2018, it was 4 times more frequently used than Lucille. Lucille has primarily been a girl name, though in the last century it has also been used for boys. In 1909, 75 times more girls than boys were given the name Lucille. 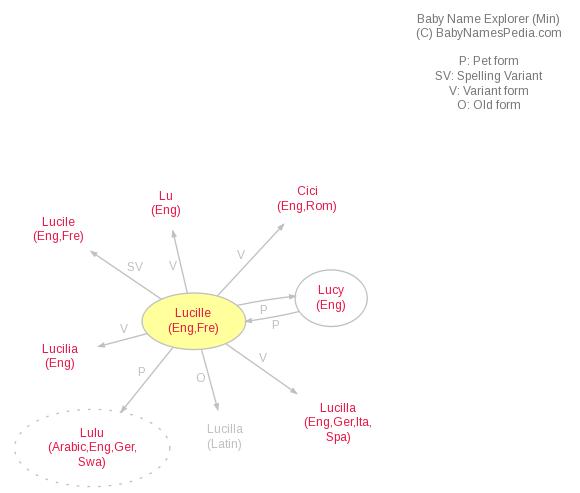