What does Lucinda mean?

[ 3 syll. lu-cin-da, luc-i-nda ] The baby girl name Lucinda is pronounced in English as Luw-SIHN-Dah †. Lucinda is mainly used in English, Portuguese, and Spanish. Its language of origin is Latin. The name is a diminutive of Lucia or Lucy, first created by Cervantes for his novel Don Quixote (1605). It became a popular fictional name, often appearing in 17th- and 18th-century English, French, and German literature. The form Lucinde has appeared in Molière's comedy Le Médecin malgré lui (The Doctor in spite of himself, 1665) and Schlegel's unfinished romance Lucinde (1799), while the form Lucinda has appeared as the name of the fictional Lucinda Roanoke in Anthony Trollope's novel The Eustace Diamonds (1871). The first name was adopted by English speakers in the 18th century, and it has often been taken as an aristocratic name.

Lucinda is a variant form of the English name Lucy in the English, Portuguese, and Spanish languages.

Variant forms share the origin and meaning of the name Lucinda.

The contracted form Lu (English), and the familiar forms Cindi, Cindy (Dutch and English), Lucindee, Lucy (English), Lulu (English), Sinda, Sindi, and Sindy are other variants of the name.

Lucinda is an unusual baby girl name. Its usage peaked in 1953 with 0.051% of baby girls being named Lucinda. It was #260 in rank then. The baby name has experienced a steep fall in frequency since then, and is today used on a very modest scale. In 2018, among the family of girl names directly related to Lucinda, Lucy was the most commonly used. 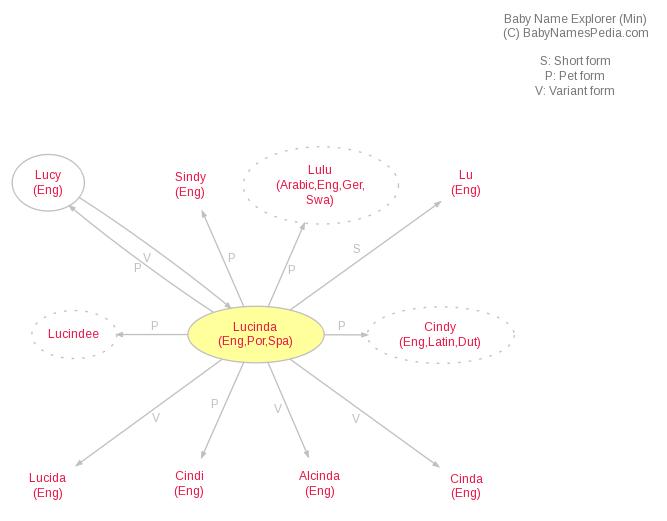