What does Lucius mean?

[ 3 syll. lu-ciu(s), luc-i-us ] The baby boy name Lucius is pronounced in English as LUW-Siy-ahS or LUW-SHahS †. Lucius is used chiefly in the English, German, and French languages, and it is derived from Latin and Old Greek origins. From Latin roots, its meaning is bright, born at daybreak - in this context, Lucius can be used in the English and German languages. A biblical name, it is derived from the element 'lux' meaning light. Lucius (Latin) is an original form of Lucius. In the medieval period, the name was sometimes bestowed upon babies born at daybreak. It was popular as a Roman given name, and one of its Late Latin derivatives was Lucianus. The name Lucius was borne in the Bible by two Christians. Lucius of Cyrene was a prophet of a church at Antioch; the other bearer was a companion and relative of Paul. The name has also been borne by two Roman kings and three popes. The first name was adopted by English speakers in the 16th century. In literature, the name has been borne by minor characters in the Shakespeare plays Titus Andronicus (1590-1594) and Julius Caesar (1599). In Ireland, the name is sometimes taken as the Anglicized version of the Irish Lachtna.

Lucius is a variant of the name Luke (Latin and English) in the English, French, and German languages.

The name Lucy (English) is the female form of Lucius.

The name Lucius is widely used; it has 23 variants that are used in English and other languages. Variants used in English include Loukas, Lucais, Lucanus, Luce, Lucian, Lucianus, Lucias, Lucious, Lucis, and Lukas. The pet form Lucky is another English variant.

Lucius is an unusual baby name for boys. Its usage peaked modestly in 1902 with 0.027% of baby boys being given the name Lucius. Its ranking then was #327. The baby name has since experienced a steep loss in popularity, and is today of irregular use. In 2018, among the group of boy names directly linked to Lucius, Lucas was the most frequently used. 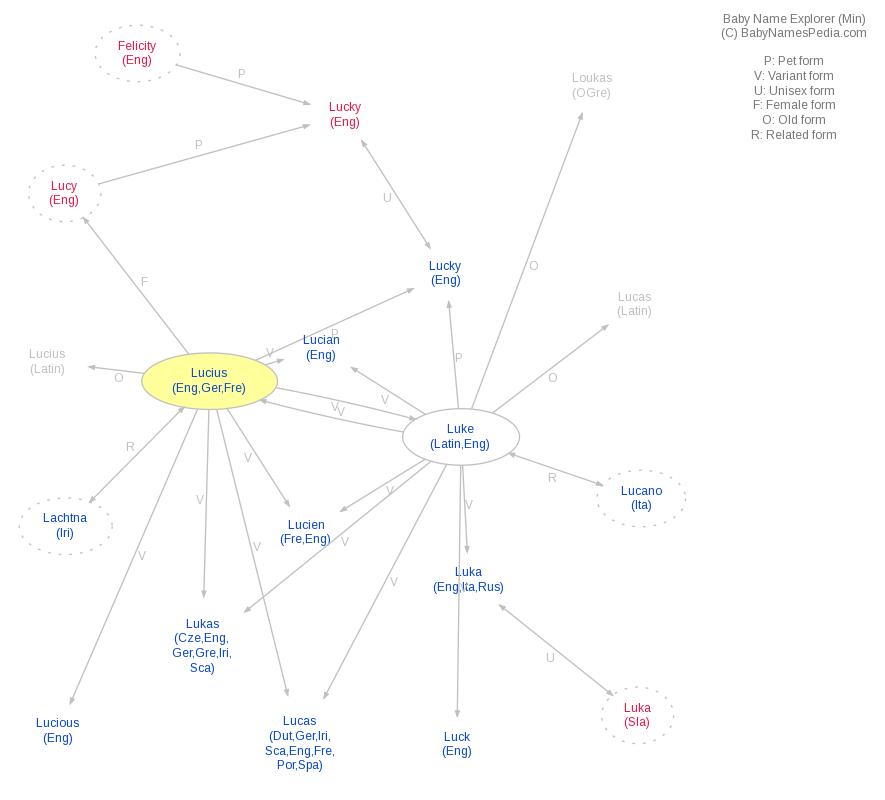