What does Lugh mean?

[ syll. lug(h), lu-gh ] The baby boy name Lugh is used chiefly in the Irish language, and its origin is Welsh and Irish. From Irish roots, its meaning is shining one. Lug (Old Irish) is an original form of Lugh. In Irish mythology, Lug was an Irish god and High King known for his skills; he was the equivalent of the pan-Celtic god Lugus, the Gallo-Roman god Mercury, and the Welsh god Lleu Llaw Gyffes. His name is ultimately of the Indoeuropean root word 'leuk'. In another Irish legend, Lughaidh mac Con was a medieval High King of Ireland; his Gaelic name can be Anglicized as Lewie, Lewis, or Louis.

Lugh is a variant of the name Lleu (Welsh).

The name Luíseach (Irish) is the female form of Lugh.

Lugh is unusual as a baby name for boys. It is not listed in the top 1000 names. 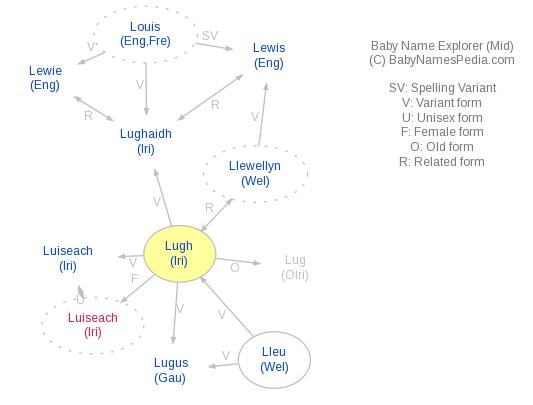