What does Luisa mean?

[ 2 syll. lui-sa, lu-isa ] The baby girl name Luisa is pronounced in Spanish as LWIY-Saa †. Luisa is largely used in Italian, Polish, Portuguese, and Spanish, and its origin is Germanic.

In addition, Luisa is an Italian, Polish, Portuguese, and Spanish variant transcription of the name Louise (Dutch, English, French, and German).

Variant forms inherit the origin and meaning of Luisa.

Luisa is unusual as a baby name for girls. Its usage peaked modestly in 1999 with 0.013% of baby girls being named Luisa. Its ranking then was #871. The baby name has since substantially dropped in popularity, and is now of sporadic use. In 2018, among the group of girl names directly related to Luisa, Louise was the most regularly used. 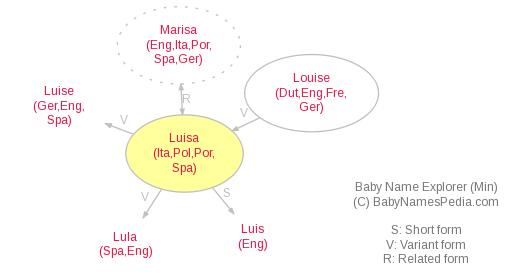