What does Mabel mean?

[ 2 syll. ma-bel, mab-el ] The baby girl name Mabel is pronounced as MEY-BahL- †. Mabel is an English and Spanish name of Old French and Spanish origin. Old French origin, English use: Older forms of the name include Amabilia (Latin), Amabilis (Latin), Mabella (Latin), Mabilia (Latin), Mabilla (Latin), and Mably (Latin). The name is derived from the Old French 'amabel' which is of the root word 'amare'. The 'A-' syllable was first dropped in the 12th century; from the 12th to 15th century, Mabel was pronounced M.AE.B.ah.L with AE as in "at (AE.T)". The current pronunciation arose from a revival of the name in the 19th century.

In addition, Mabel is a shortening of the Spanish name María Isabel.

Mabel is a widely used name; it has 29 forms that are used in English and other languages. English forms include Amabel, Amable, Mabelean, Mabeleen, Mabella, Mabelle (used in French too), Mabelline, Mabil, Mabilia, Mabill, Mablean, Mabyn, Maebell, Maebelle, Maibel, Maible, Maybel, Maybell, Maybelle (used in Latin too), Mayble, Maybull, and Moibeal. Other English forms include the shortenings Mab and Mabe, the pet form Maybeline, and the spelling variant Mable. Forms of Mabel used in other languages include Mabbina (Irish), Mabli (Welsh), and Máible (Irish).

Variant forms inherit both the origin and meaning of the name Mabel.

Mabel is fairly popular as a baby name for girls, and it is also perceived to be trendy. At the height of its usage in 1901, 0.825% of baby girls were named Mabel. Its ranking then was #24. The baby name has since experienced a marked decline in frequency. In 2018, its usage was 0.039% and its ranking #436, having regained its popularity somewhat in the recent decade. Within all girl names in its group, Mabel was the most commonly used. Mabel has predominantly been a baby girl name, though in the past century it has also been used for boys. In 1909, Mabel as a baby girl name outnumbered its use as a boy name by 88 times. 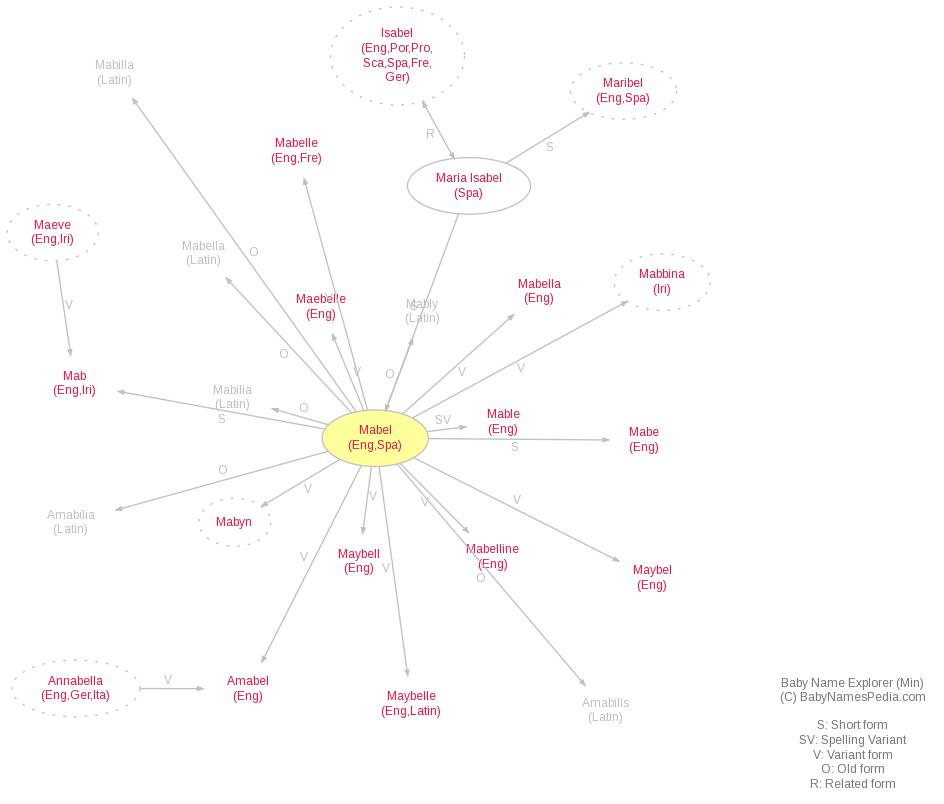