What does Mac mean?

[ 1 syll. mac, ma-c ] The baby boy name Mac is also used as a girl name, but the use for boys is much more common. It is pronounced as MaeK †. Mac is used predominantly in the English and Scottish languages, and it is derived from Scottish Gaelic, Irish Gaelic, and Latin origins. From Scottish Gaelic roots, its meaning is son of - in this context, Mac can be used in the English language. It is derived literally from the word 'mac' meaning son. The name is often used as a short form of longer names starting with 'Mac-'. It has also developed into an independent name, as well as a colloquial slang term for a male.

Mac is a variant of the name Macdougal (English).

Mac is also a variant of the name Macmurray (English).

Mac is also a variant (English) of the name Maximilian (English and German).

Mac is an unusual baby name for boys. Its usage peaked modestly in 1942 with 0.028% of baby boys being given the name Mac. Its ranking then was #308. The baby name has since fallen from favor, and is currently of sporadic use. In 2018, among the group of boy names directly linked to Mac, Maximilian was the most widely used. In the past century Mac has predominantly been a baby boy name. 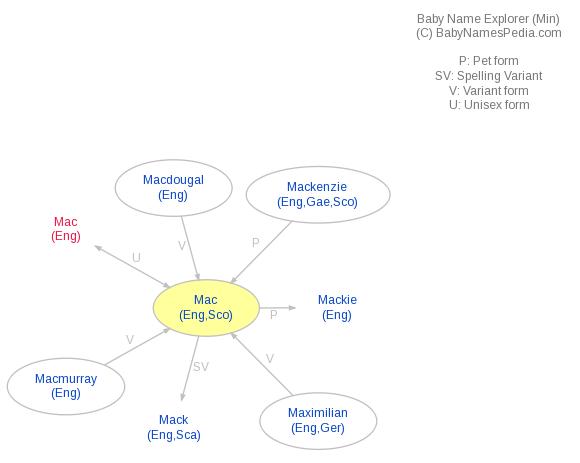